WHAT YOU NEED TO KNOW ABOUT TIRE SPEED RATINGS

Enter an email address, and we’ll send a link to this page:

Enter your phone number to receive a text message with a link for this information. The number will not be used for any other purpose. Carrier charges may apply for receiving text messages.

Most modern passenger tires bear a tire speed rating, a designation indicating the tire’s designed speed capability. In other words, it’s the fastest speed a tire can handle before it does not perform as designed. Tire speed ratings do not imply that the vehicle may safely be driven at the maximum speed for which the tire is capable, particularly under adverse weather or road conditions.

How to Find Your Tire Speed Rating

If you’re wondering what tire speed rating your vehicle manufacturer recommends, simply look in the manual. You might also find it in the driver’s side door jamb, the gas tank hatch, or inside the glove box door – anywhere that lists the right tire code for your vehicle. 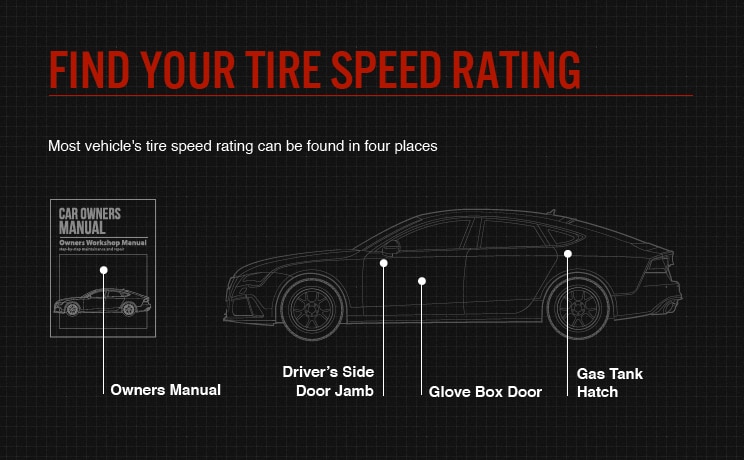 Speed rating is easy to locate because it’s usually the last item in the character sequence in the tire’s size code. For example in this tire code: “P205/60R16 82S,” S is the speed rating. To view the tire size code for your current tires, just look at the sidewall. Does the speed rating on each tire match what the manufacturer recommends? It should! 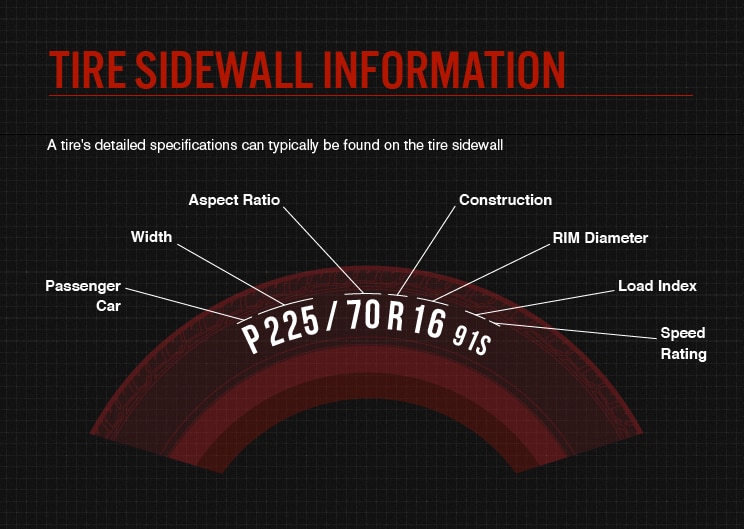 Also remember that the tire speed rating isn’t the same thing as a recommended travel speed. The rating will nearly always exceed maximum highway speed limits, but no tire or vehicle manufacturer advises driving faster than the law allows.

Speed ratings are the product of laboratory testing – with simulated speeds and loads. To receive any kind of rating, a tire must demonstrate that it’s capable of sustaining a particular speed. Industry standards govern the process of reaching and maintaining a given speed during a test.

However, it’s important to remember that the lab can’t simulate every conceivable condition. Think of your tire’s speed rating as an indicator of the product’s capability under controlled conditions (i.e. fully inflated, vehicle running properly, good weather conditions). Your tires’ actual speed capability may be less than its rated speed, since it is affected by factors such as inflation, wear, vehicle condition (including alignment), driving conditions and the duration at which speed is maintained. Speed ratings do not apply to tires that have been damaged, altered, under-inflated, overloaded or repaired.

Today’s speed rating system uses letters A through Z. Each letter corresponds to a specific speed. In general, that speed goes up as the rating advances alphabetically. For example, a tire rated “L” is good for a lower maximum sustained speed than one rated “N.”

But the tire speed rating system isn’t without its quirks. For instance, the system’s European roots give it unusual mile per hour maximums. Another such quirk is that the letter “H” is out of place. Instead of appearing after “G,” it falls between “U” and “V” as does the speed to which it corresponds.

When the speed rating system was first developed, the highest speed rating was the unlimited “V” rating. This was for tires whose maximum sustained speed was 149 mph (240 kph) or more. Then, as more manufacturers came out with tires that could handle speeds in excess of 149 mph but still hit a maximum speed at some point, “V” became limited (149 mph instead of 149+ mph) and “W” and “Y” speed ratings were added to the chart.

Many tire speed rating charts also list the “Z” rating as anything over 149 mph. Some manufacturers will insert a “Z” in the middle of the tire size description (right after the aspect ratio) when the tire is rated at “W” or “Y.” And if a tire is rated in excess of 186 mph (300 kph), manufacturer’s usually will list a “Z” within the size description, per industry standards.

The following speed ratings are those you’re most likely to encounter for ordinary vehicles. They begin with a maximum speed of 118 mph (190 kph) and increase from there.

Indicated by a letter, each rating corresponds to a specific speed.

With a maximum speed of 118 mph, you usually find tires with speed rating “T” on family sedans and minivans.

If you recall from earlier, the “H” speed rating doesn’t appear after “G” but between “U” and “V.” It represents a maximum speed of 130 mph (210 kph) and is commonly found on sports sedans and coupes. In earlier incarnations of the speed rating system, “H” stood for “high performance,” which is why it maintains an unusual position in the speed rating spectrum today.

A relatively new addition to the speed rating chart, tires with speed rating “W” can achieve a maximum sustained speed of 168 mph (270 kph).

A “Z” rating can mean different things. While it nearly always means a high performance tire for high-performing sports cars, “Z” may actually appear in the middle of a tire’s size information. When it does, it represents either a maximum speed of more than 149 mph (240 kph) or 186 mph (300 kph). Which of those speeds it refers to will depend on the specific tire. Contact the manufacturer to get details on any Z-rated tires. Sports car owners are more likely to encounter this speed rating than owners of typical family sedans.

Always choose the speed rating that corresponds to your vehicle manufacturer’s specifications, and be sure all four tires have the same rating. Speed ratings are based on laboratory tests under specific, controlled conditions. While these tests relate to performance on the road under those conditions, remember that real-life driving is rarely identical to test conditions.

FIND THE RIGHT TIRE FOR YOU.

RESOURCES FOR THE ROAD AHEAD

Learn about everything from proper tire care to the advantages of Bridgestone's breakthrough tire technology and everything in between.