Tire Specs: Understanding the Numbers on Your Tires

Enter an email address, and we’ll send a link to this page:

Enter your phone number to receive a text message with a link for this information. The number will not be used for any other purpose. Carrier charges may apply for receiving text messages.

If you’ve ever looked over the numbers and letters stamped into the sidewall of your tires, you’ll know there’s a lot of information available in a small amount of space. But what does it all mean? Following is a guide to help you understand that information so that you’ll have an easier time determining which tires are right for your vehicle.

Fortunately, the answer to this question is yes. Here, a standard set of interchangeability guidelines is governed by The Tire and Rim Association for all manufacturers of tires in the United States. They also have established relationships with most major tire manufacturers in Japan, Europe, South America, and other parts of Asia.

It’s important to understand that tires come in many different sizes that can determine the tire’s performance, their suitability for your specific vehicle, and their overall appropriateness for your driving needs. It is recommended that you check your owner’s manual to understand what size of tires are correct for your vehicle. The following information about your tire’s size and type may be found on its sidewall:

The letter or letters at the beginning (or end) of this sequence indicates the type of tire: P, LT, ST, or T. Most tires will have the letter P, which is short for “P-metric” or a passenger car type tire. These are typically installed on passenger cars, light trucks, SUVs, and vans. An LT appearing at either the beginning or the end of the sequence indicates the tire is a “light truck” tire, or a tire designed to be used on vehicles that carry high loads or pull heavy trailers. ST indicates a “special trailer” tire, used on (you guessed it) - trailers, while “T” denotes a “temporary” tire, like a “donut spare” you might find in the trunk of your vehicle.

The first set of numbers in the numerical sequence indicates the width of your tire as measured in millimeters from sidewall to sidewall.

While there are exceptions, a lower aspect ratio is often indicative of a sportier, more performance-oriented tire while a higher aspect ratio tends to indicate the tire was designed for other priorities like comfort or rugged durability.

Next you will find a single letter, either a “D”, a “B”, or an “R” which indicates the construction type for the tire. “R” indicates that the tire is a Radial tire and “D” designates that it is a Diagonal (also known as “Bias”) ply tire and “B” means it is a Belted-Bias ply tire .

Today, tires featuring Radial construction are by far the most common type. They are made with layers of fabric cords positioned at a 90’ angle to the center line of the tread. Radials became the dominant type of construction because of their superior fuel economy, traction, ride comfort and especially tread life when compared to earlier types of construction. Diagonal (or Bias) ply tires employ layers of cord which cross each other at a 30’-45’ angle to the center line of the tread. This type of construction dates back to the earliest pneumatic tires.  It was the preferred design for many years because of its resistance to damage from poorly paved or unpaved roads and relative ease of construction on the building machines available a century ago. Belted Bias tires combine the diagonal ply casing of Bias tires with belts (usually made of fiberglass) under the tread for increased traction and tread wear vs conventional Bias ply tires.  Both Bias and Belted-Bias ply tires are available today primarily as reproduction tires for antique vehicles, though some racing, trailer and off road light truck tires use these types of construction, too.

The next number in the set indicates the rim diameter—sometimes also noted as the wheel diameter. This measurement is almost always given in inches. Though there are exceptions, rim diameters ranging from 13” to 22” are most common for passenger vehicles in North America.

Other Information Found on the Tire Sidewall

The next number, which is paired with a letter, indicates the load index for that tire. The load index is the maximum amount of weight that an individual tire can carry. Because load indexes for a given tire size may vary, it is important to check to be sure the tire you’re considering meets or exceeds your specific vehicle’s manufacturer’s requirements. 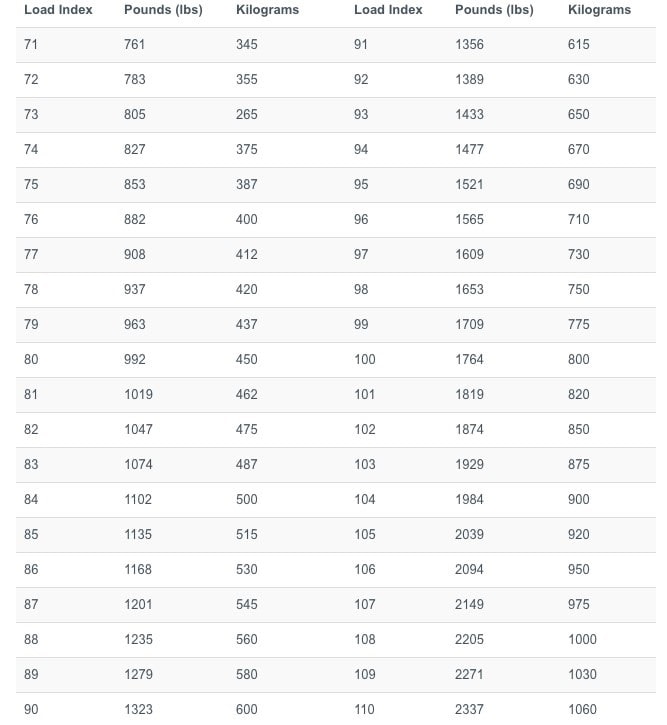 In Europe, some highways have speed limits higher than those in North America – and a few have no limits at all.  In order to give drivers and government authorities an indication of a tire’s ability to withstand the stresses associated with elevated speeds, the speed rating system was developed.  Simply put, the speed rating is the maximum speed at which a set of properly inflated tires may be driven. In North America, speed ratings are useful mostly as an indicator of a tire’s performance capability – how responsive is its handling, how strong is its braking traction, etc.  Since there can be large differences in handling and traction for tires within a given speed category, speed ratings alone shouldn’t be used to determine tire choice. You can find more information about tire speed ratings here.

Close to where the sidewall meets the tread, you will also find the Treadwear, Traction, and Temperature grades. These grades are assigned by each tire maker to its own products.  They may be used to make comparisons within a tire maker’s product line, but because of variations in testing procedures, they should not be used to compare tires from one company with those made by another company.

4.    US Department of Transportation Code

Every tire sold in the United States is required to include a US Department of Transportation (US DOT) Tire Identification Number on at least one sidewall.  It is located near the rim, and it starts with the letters DOT. These letters are followed by a sequence of 8-13 letters and numbers that denote that tire’s manufacturing location, its specific size, and the manufacturer’s identifying code. The final four digits indicate the week of manufacture followed by the last two digits of the year of manufacture.  For example, 5014 would indicate a tire manufactured during the 50th week of 2014. On the sidewall opposite the one with the full DOT code, only the letters DOT and the first four digits of the code are required.

Information on the materials used in the tire’s internal construction is listed next to the DOT code. This information includes both the ply composition—that is, the number of layers as well as the type of materials that were used in its construction.

You probably know what tire tread is: the part of the tire that makes contact with the road surface. But what you might not know is that the specific tire tread pattern your tire utilizes can impact how your tires perform, such as how they handle and how much traction they provide in different driving conditions. Let’s look deeper at both the elements of tire tread patterns as well as the three types you might run across in your search for new tires: Symmetric tread, asymmetric tread, and directional tread.

Another tread type found on passenger tires is the asymmetric pattern. In these types of patterns, the inner and outer halves of the tread are designed with different channels and tread blocks. This design is intended to enhance performance such as water dispersal or dry grip and snow traction. In the example above, the Bridgestone Turanza Serenity Plus all-season touring tire, you can see how the left (outer) side of the tire tread features chunkier tread blocks that provide a larger contact area for increased stability and handling on dry roads. The right (inner) side of the tread pattern features more channels and smaller tread blocks to aid in channeling water away for improved rain traction. Multiple rotation patterns may be used for this type of tire.

Some tire tread patterns are designed for rolling in a unidirectional way, meaning in only one direction. These are called directional tread patterns and are often found in high-performance tires and winter tires. This V-shaped tread pattern helps move water more efficiently from under the contact patch to help boost hydroplaning resistance at higher speeds. Since the channels only work if mounted with the V’s oriented correctly, once the tire is mounted, directional tires can only be rotated using a front-to-back and back-to-front pattern. Directional tires will feature an arrow on the sidewall indicating which direction they need to roll when mounted on the car.

RESOURCES FOR THE ROAD AHEAD

Learn about everything from proper tire care to the advantages of Bridgestone's breakthrough tire technology and everything in between.